There’s a cool website called “Top 500” that keeps track of the 500 top supercomputers in the world. For some years now the U.S. has captured the top spot. That’s about to change (see here). Although Oak Ridge’s “Jaguar” computer still comes out on top in the speed with which it computes standard algebraic problems (called “Linpack”), peak performance now belongs to China’s “Nebulae” machine. 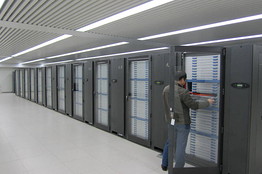 The Wall Street Journal, reporting on this change of fortunes, states:

[The new Chineses machine] should serve as a wake-up call that China is threatening to take the lead in scientific computing—akin to a machine from Japan that took the No. 1 position early in the past decade and triggered increased U.S. investment in the field.

“It’s definitely a game-changer in the high performance market,” said Mark Seager, chief technology officer for computing at Lawrence Livermore National Laboratory. “This is a phase transition, representative of the shift of economic competitiveness from the West to the East.”

Why is all this important here at SuperScholar? Lead in technology tends to reflect lead in scientific research and education. The U.S. has consistently had the top research universities over the last 60 years. That may begin slipping as the U.S. lets its lead in technology slip.

Changing the Way of Education?

Arabic — The Second Language of the Future?